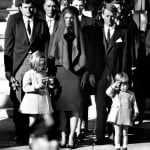 I was days away from my 11th birthday and I was having a great school year. Why? I had my first black teacher and I was so excited. This may seem a strange statement nowadays, but in 1963 it caused quite a stir in the school district. Many had withdrawn their children from that school because of it. Her name was Mrs. Johnson and she was the best teacher I remember from elementary school. I can still see her when I close my eyes. She was tall and beautiful and, like me, she loved history.

On that fateful day, the PA system crackled as all teachers were ordered to report to the office. We were given an assignment and told to wait for Mrs. Johnson to come back. We all sat there and did our work without a monitor. There was someone patrolling the halls in case of emergency and the doors were left open. My class sat there and dutifully did the assignment. Things were very different back then.

When Mrs. Johnson walked back into class, you could see that she was crying although she was trying to hide it. We were really worried now. The teacher was crying? All we were told, all she was allowed to tell us was that something terrible had happened for our country and we were being dismissed. We were supposed to ask our parents to explain it. There were a bunch of scared kids in that classroom, let me tell you! To this day, I wish she would have been allowed to tell us what was up. I’m sure I wasn’t the only one who was imagining the end of the world on my way home.

Because of the unexpected dismissal, no buses were running. My parents were both working and I couldn’t get a ride. So. . . I walked the five miles home. It seemed like it took me forever. I was not the athletic type so it probably did. When I got home and burst through the door, my mom, dad and grandparents were sitting in front of the new color TV my dad had proudly purchased a week or so before. They weren’t even notified that the school had dismissed us. That was the level of shell shock America experienced on that day.

I quickly learned what happened and was very upset, as was the entire country. But I was 11 years old. My upsetment was two-fold. Yes, I was upset that our president was dead. . . . murdered. But there was something else and it didn’t hit me hard until the funeral.

Caroline Kennedy Schlossberg and I share a birthday. She is five years younger than me, but we were born on the same day. Every year since Kennedy’s election, my family made a big thing out of the fact that my birthday was Caroline’s birthday, too. This little girl was less than a week away from her 6th birthday. And there she stood at her father’s casket. I was so upset for her! I kept thinking to myself, “This shouldn’t be! She shouldn’t have lost her daddy days before her birthday.”

I remember being glued to that TV set through the whole funeral, not exactly a fun thing to do for an 11-year-old. And I kept staring at Caroline, wishing her to be okay. John-John famously saluted the casket. He was three. I didn’t think he understood, but I knew Caroline did.

I cried for her that day and for many years after. We are both old ladies now, but I still can see that small child desperately trying not to cry despite the realization that she would never see her father again. And I can still feel what I felt for her on that day, the sadness and the grief that no one who is almost six years old should have to feel. To me, it was okay for the country to mourn, but Caroline shouldn’t have had to.

Fifty-two years have gone by since that fateful day. My memory is not what it once was but, for that brief moment in time, John F. Kennedy’s funeral stands frozen in my mind. And I still think of Caroline. Her dad, mom and brother are now gone. And although I have seen many pictures of the now 58-year-old woman she’s become, to me she will always be that little girl standing in the funeral procession trying so hard not to cry. 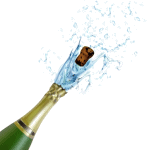 Most folks associate the word sparkling with champagne, right? Not boobs. Not hardly. Up until recently, I did, too.

It was time for the annual boob squish. I dutifully made my appointment and, on the day appointed, headed over to the diagnostic imaging place. The lady who called me back was very nice, professional yet sweet, and answered my questions.  She even explained about the fancy, schmancy new, 3-D machine she was going to use, how it worked and she showed me how it was so much better than prior models.

And then we got down to it. She had me as delicately placed as one can be between the killer plates when I hear her gasp. Hey, wait a minute! She didn’t even take any pics yet. What gives?

I hear a giggle and then I hear, “Carla, you have sparkling boobs.” I’m like. . . . HUH? She is still giggling as she comes over and gets me out of the machine. She brings me back behind the screen to show me the preview and, sure enough, there are little glowing spots all over my boob!

She asked me if I had used any perfume with sparkles (on my boobs?), or maybe sparkling bath stuff. I’m not exactly the Sparkle Plenty type, so I told her no. We couldn’t figure out what was going on, but we had to get the mission accomplished. She sent me into the bathroom with wipes and instructions to wash thoroughly. I washed. The pictures got taken, sans sparkle.

When I got home, I just HAD to know, so. . . . off to the bathroom I went testing all my bath products.  Not a sparkle or a glow in any of them.  Since it came off in the wash room, it definitely wasn’t my sparkling personality. What had I used?

Word to the wise: Before going for a mammogram or any other imaging study, I would think, do NOT use anything that has any type of residue at all.  It will show up on the film.  And, after all, who the hell wants sparkling boobs?