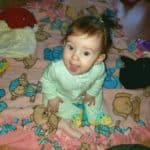 Today is December 31st, 2016. Many are preparing to celebrate the end of this year. It was a year to remember, for sure. It was the year where the entertainment industry lost a lot of people, some expected, some not. It was the year the U.S. saw our political system devolve into something I can’t even describe. It was the year that civility and common decency flew out the window and online hatred soared to new heights. And while I deplore all of those things, I can’t really hate 2016 because, for us, it was also something magical, something wonderful and something miraculous. 2016 brought us the birth of Sybella Starr.

It happened on April 24th. She was due on the 28th so the text that my son and his lady were headed to the hospital wasn’t unexpected. It was a long day for her beautiful mommy, who ended up with a C-section just before 10 p.m. Sybella was here. The next generation arrived in a glorious seven-pound package!

Holding that little bundle for the first time was something I will remember the rest of my days. She was tiny but feisty, with a full head of dark hair and deep blue eyes that looked right into yours. Less than 24 hours old, she already followed the voices of Mommy and Daddy. At that moment, she was the most beautiful vision I had ever beheld.

As I write this, Sybella is eight months old. Those eight months have been a roller coaster ride for our family, definitely not all lollipops and roses. But through it all, there was Sybella. We did our best to visit every week. No matter how bad that week had been or how broken my heart was, somehow all was right with the world the minute that little girl was in my arms. That feeling would sustain me for the next seven days until I would race to hold her once more.

Sybella is growing up way too fast, as is the destiny of most children. She is trying to walk. She talks right in your face and I’m sure it’s the most scintillating conversation in the universe. I only wish I knew what she was saying. Soon, I will. She is funny, spirited, super intelligent and loves to play. She is the most beautiful baby in the world, according to her very prejudiced Nana and Pop-Pop. And while I am sure I will be saying things like this about subsequent grandangels, right now, it’s all Sybella. And what an “all” that is!