How’s quarantine treating you? Bored yet? Not bored? Learning something new? Mastering Netflix and chill? Hey, these are all ways to deal with things as they are now. Actually, anything you can do to stay sane during this trying time is a good thing. Me? I play silly little phone games. Well, let me back up a bit to explain that one.

When my gamer son was in high school and his friends would come over, they tried to make small talk with me. One day, one of said friends asked me if played computer games. I proudly held my head up and told him about the three or four games I play on my phone. Had he been able to pat me on the head, he would have. He grinned and said, “Oh, you play silly little phone games.” He was basically correct, but let me tell you three life lessons I’ve learned from those silly little phone games.

Some Levels Are More Challenging Than Others

You know how you have some bad days and some good days? That’s life, as in some days you eat the bear and some days the bear eats you. Same for silly little phone games. Just keep playing. If you streak through 15 levels, pat yourself on the back, but if you’re on the same level after a month. . .pat yourself on the back. Keep at it. You’ll move up.

We’re not designed to go through this life alone. I know right now it seems that many of us are forced into that, but it’s not the natural way of things. Same thing with games. They give you those boosters or helpers for a reason. You can win them, buy them, however you want, AS LONG AS YOU USE THEM! When I first started playing I would never use anything. It had to be ALL ME. What an idiot I was! One day I needed to clear one row to win this level I’d been on for weeks. I looked down and there were the tools to do it! So I hit one and BOOM. Done. After that? I rarely have anything in my tray. They get used up as soon as they appear. It makes the game much more fun. Life will be fun again, too, with all our helpers and friends.

Keep playing long enough and you’re going to win your level. Don’t give up. Just keep going, especially if you love it. John Lennon famously or infamously said. . . 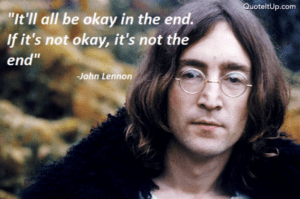 He was right. Silly little phone games can take a while. So can life. But guess what? It’s worth it. And even though it may not seem that way right now, hang in there. Friday’s coming.