I’m writing this the day after Mother’s Day so as not to take away one iota from the celebration of really terrific mothers. Tribute after tribute on Facebook brought tears to my eyes as I read about these wonderful women who trained up a new generation of daughters to be mothers just like them. It’s a beautiful thing. But my mother wasn’t one of them. And since I know I’m not alone, I’m writing this Mother’s Day thought for the rest of us.

A Little Bit of History

My mother didn’t like me much. It was pretty cut and dried. I didn’t look like the correct side of the family and I wasn’t what she had in mind when she thought she was getting a cute little daughter. And I never lost my baby chubs which was anathema in a family that worshiped thinness. I was well-spoken, well-read, got straight As in school and really tried my best. I made her beautifully hand-crafted Mother’s Day gifts, but I was fat, ugly and good for not much, according to her. She wasn’t physically abusive. She just didn’t like me. And she seemed to think her ugly words would turn me into what she thought she was entitled to in a child.

I saw the moms of friends when I went to their houses to play or do schoolwork. Their moms were kind and sweet and looked at their children with love in their eyes. I was envious. Hell, I was downright jealous. There were times when I went home, crawled under the covers and cried. My mom wasn’t bad. She just didn’t like me. I knew it. She knew I knew it. It made for a very awkward childhood.

A Rather Rude Awakening

And then came the day I found out the hard way that I wasn’t the only one with a mother who wasn’t straight out of the pages of Ladies Home Journal. My then best friend invited me to be her maid of honor. I was over the moon. Her mother wasn’t. She didn’t like the way I looked either and said I would ruin the wedding photos. Where had I heard that before? She was afraid to tell me, but she finally had to because her mother threatened to not pay for the wedding if I were included in it. So I bowed out gracefully. And. . . you guessed it. . . I went home and cried.

As much as that hurt, it opened my eyes. Now I knew that I wasn’t alone in the not-so-perfect mother department. Some moms were physically abusive. Some stood by while their daughters were abused. Some drank and turned into monsters. Some were nasty and vicious. If my mom fell into any of those categories, it would be the last one. And as I said before, she just didn’t like me.

Time passed. We lived a little ways apart. She still slung her verbal missiles at me every chance she got. One would think she enjoyed them. Maybe she did. I don’t know. And then two things happened that changed everything. My father died. She started getting wonky or wonkier, as the case may be. Then my grandmom (her mother) died. She lost her mind. By this time, she lived with me. Yeah, I know. She took all her grief out on me. And there I stood, a 50-something year old woman transported immediately back to when I was ten years old and getting browbeat about how I wasn’t good enough, didn’t look right, wasn’t good for anything, nobody would ever want me, yada yada yada. That lasted for ten long years.

And then came the day she broke her hip and went into rehab. I was fully prepared to take her home and let the cycle begin again. She was my mother. I had to take care of her. I had no other choice, right? That’s how we were raised. So imagine my surprise when she told me she wanted to stay in the nursing home! The place wasn’t all that great either. But she wanted to be there, so I signed her in.

The Beginning of the End

She had two happy (????) years there before I am convinced their lack of care let her die. One day they told me my mother was sick. The next day I was running to the intensive care unit of a local hospital to be told she was dying from total organ failure. The last time I talked to her, she asked me to sign her into hospice. She said my father (he passed 14 years earlier) had come to take her home. I had her power of attorney so I made the arrangements. She said, “Thank you.” Her last words to me and some of the kindest I remember. That night they took her to a beautiful hospice unit of another hospital. Two days later she was gone. It was the day before what would have been my parents’ 63rd wedding anniversary.

That was six years ago. Do I miss her? I think I miss the idea of having a mother. But do I miss MY mother? Maybe. No. I honestly don’t know. I know I can think about her now without getting too upset. When I drive by her grave these days I yell out the window, “Hey, Ma, how ya doin’?” Maybe I use some profanities. And maybe after a lot of years, I’m okay. Or sort of okay.

So I’m writing this for me and for all of you who didn’t have perfect mothers either. It’s a Mother’s Day thought for the rest of us. I try to keep in mind that nothing in life is perfect. Nothing will ever be perfect. But it’s up to us to take what we have and do the best that we can with it. And most importantly, we made it in spite of that mother thing. 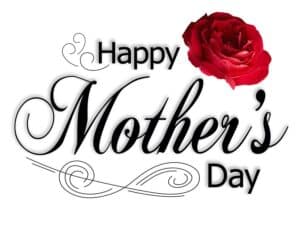