I have been on a computer in one form or another since 1985. We had one of the old Radio Shack computers lovingly dubbed a Trash 80 (TRS-80). I used to joke that you could put in your DOS command, go cook dinner, eat it, wash the dishes, come back and it might be finished. But 1985 and 2020 are two very different animals. Technology moves faster than a toddler who’s been asked what’s in his/her mouth. So let’s take a look at an old lady in the age of tech.

Notice, I didn’t say “cell” phone. I actually got my first portable phone in 2001. My husband bought it for me for Christmas to use in an emergency. It was about the same size as the handset on a conventional phone today. I had to get out the BIG pocketbook to carry it around. All it did was make calls. I have to admit to being summarily unimpressed. I had gotten around without a portable telephone for almost 50 years. And, of course, there were still phone booths. Then.

When my eldest son achieved high school age, he started lobbying for his own cell phone. I refused to buy it for him. We made a deal. Get some jobs, buy your own phone and I’ll buy you some minutes. I NEVAH thought he’d do it, but. . . he did. As promised, I bought the minutes. So then I was dragged kicking and screaming into the cell phone age as I had to learn to text to chase him around. Who here remembers how to text on an old candy bar or flip phone? I hated it, pressing all those buttons so many times just to get the wrong letter. HAH! The old lady in the age of tech story was seriously just beginning.

And then came the iPhone 5. It was years ago now and, hey, they were giving them out free for a contract. At first I was like a kid when the Sears Christmas Catalog arrived in the mail. Then, as with most things, it became pretty ordinary. It played some mean games. That’s what it was used for, for the most part. And then I had to upgrade. Confusion, thy name was iPhone 6. And all my friends, whether on iPhone or Android, who had caught the bug long before excitedly exclaimed, “Oh, you can do this and this and this and that!” So I learned to nod appreciably and get excited with them. Then home I went to work on my trusty computer.

In 2014 I let people talk me into getting an Apple Mac Book Pro. They convinced me I needed one so my iPhone would synch with it. (HUH?) I was assured it wasn’t *that much* different and I would pick it up in no time flat. So I went to the Apple Refurb Store and bought one. Let me tell you how many times that @O$&((@#$(&^*@$ thing almost went into the wall! It was small enough to throw, too! After an astronomical amount of frustration, a wonderful woman at Apple Care took almost 90 minutes with me when I called sobbing that I wanted to return it. She got into my computer remotely, put a big red arrow on my screen and told me to follow her. No question was too dumb. Once we got the thing set up properly, she gave me a tutorial on how to use it geared for a Windows person. It took about a year before I was fully comfortable with it, but now I consider myself fairly competent in both systems. Fairly.

Then it Was Time for an iPad

Okay, okay. I was slowly going over to the dark side. . . Apple. The phone and the Mac Book did synch up. I was using an Amazon Kindle Fire for a tablet. It was nice, but I used it like a toy. Once again, another well-meaning friend told me I would not use an iPad like a toy and. . . here it comes. . . it would synch up. So I saved up and bought one on sale. I had to fight Best Buy to get their advertised price and almost got arrested (a story for another time), but I walked out of that store with my Apple iPad Air 2 raised in the air with a victory pump . . . for exactly the price in the ad.

So Now I’m an Apple Geek

I went along for a few years, still getting mildly confused when I switched back and forth too quickly. Why didn’t I abandon the Windows computer? Because in NJ you are not permitted to use Apple iOS for legal transcription which is my main side gig. And it was easy because I knew it so well. When I didn’t want to think, back I went to Windows. But I have to admit I thought it was pretty damn cool how I could switch back and forth seamlessly between three devices!

And then the iPhone 6, by now way too many years old, was dying. I really didn’t want to upgrade, but. . . say hello to my bright red iPhone XR. All I can say is thank God my 24-year-old daughter has the same phone.

So now I make and receive calls, text like a madwoman, play some pretty neat games, check the weather and do many other things on my iPhone. I maybe use 1/100th of its capability. I always run back to the computer. Now I’m changing things. Why? Because I’m a stubborn (and envious) old bat and I want to do things the way my younger friends do. Some things I pick up right away. Some things take longer. “Mom, why didn’t you just ask me? I could’ve saved you all that time.”

Where am I Now?

Fighting with a phone that is still too much for me. But I AM learning, proving that an old dog can be taught new tricks. It just takes a helluva lot longer. And for the record, I still prefer using a computer with a full-size keyboard. The iPhone XR shot me the hairy eyeball when I wrote that. Still, had someone ever told me in high school or even college that one day I would have a 3×6″ device in my hands that would run my life, I would have told them that they needed to pay more for their drugs as they obviously were not getting quality.

Now it’s time for YOUR story as an old lady in the age of tech. Come on, I know I’m not the only old lady who fought (fights) with this crapola. Put it right here in the comments so we can commiserate together. 😉 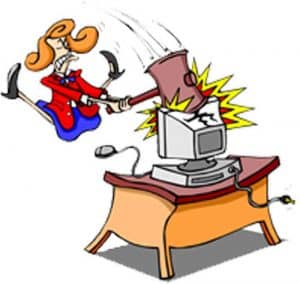